The carnival attracts a large number of foreign tourists. "Our classmates want to see what the fun carnival has. The bat roller coaster is really one of the most exciting amusement equipment in the world.... 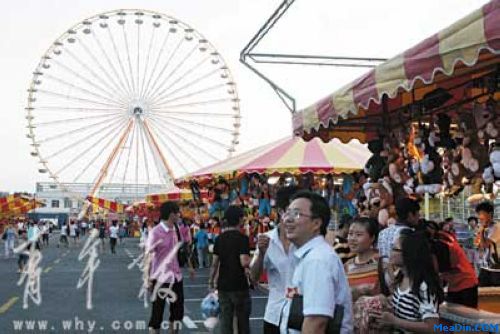 "Our classmates want to see what the fun carnival has. The bat roller coaster is really one of the most exciting amusement equipment in the world." Changzhou high school student Xiao Yu took the "step on mission" to travel to Shanghai, if "true" Itâ€™s very fun, and his classmates are also planning to travel to Shanghai in the near future. The reporter recently learned from the economic hotels around Shanghai Carnival and Carnival that after the opening of the carnival, the students from the field and the family and family were free to travel to Shanghai.

Although some of the super-stimulating projects in the current Carnival are not disappointing for tourists, the industry expects that after all the projects are open, the "Carnival + China Pavilion" route will set off a small number of foreign tourists, especially the family-friendly family. climax.

If you come to the carnival to visit the class, then you will come to Shanghai.

Changzhou's Dinosaur Park, Anhui's Wuhu Fangte Dream Kingdom, and Shanghai's Happy Valley are not new to Changzhou's second-year student Xiao Yu. They have been playing all over. This time he came to Shanghai to hear that the carnival has a bat roller coaster that is faster than the F1 car, and wants to experience a rapid feeling. Xiao Yu told reporters that in fact his classmates also want to come to play, just because he has relatives in Shanghai, so let him first "explore the class." "If it's fun, their mom and dad will bring them."

When he entered the carnival yesterday, the super-stimulus project such as "Bat Roller Coaster" was still not open, and Xiao Yu felt disappointed. The only good news is that playing "Bat Fighter" is still quite exciting in his view. "It feels good to hang in the air."

Coincidentally, during the recent interviews with the Carnival, the reporter found that many tourists came from the field to the carnival. A freshman from Yangzhou, who lives in Yangzhou, told reporters that they came to Shanghai on July 25 and waited until July 28th to wait for the carnival to open. Xiaoliu, who is a junior in Jilin, is also attending the carnival, deliberately with his boyfriend. Booked a flight to Shanghai on August 1 and intends to experience a thrilling journey together. In the face of the Carnival's most suitable project for couples to play at the same time, "Bouncing bungee jumping" and "Star Ferris Wheel" are not open, Xiao Liu said that it is very regrettable, because the ticket is booked in advance. "The discount ticket can't be returned. Look at the news and find that these items are not open and can only come."

According to statistics from Mama Travel Network, the number of Carnival tickets booked by visitors across the country has exceeded four digits.

These days, the weather is relatively comfortable. Wuâ€™s grandmother and her wife, who lived in Changshu, took two grandchildren to travel to Shanghai by car. Yesterday, Grandma Wu and her wife lined up to see the China Pavilion. Two grandchildren who had just entered high school accompanied the carnival. "The two grandchildren have heard that Shanghai is hosting the International Carnival, and it is the largest in history. It is not a quarrel. They have no parents, so we have to work for the elderly, and the grandson is a carnival. Let's take a look at the China Pavilion."

Part of the family and children who lined up to see the China Pavilion said that they wanted to take their children to the carnival. Jing Hui, a tourist from Shanxi, said that this time he came to Shanghai to see the treasures in the China Pavilion. I donâ€™t know if there is a carnival. "After the Expo Park, I saw the towering Ferris wheel. The 4-year-old son was happy to clap his hands. The tickets are not expensive anyway. I plan to take him to see him."

Nearly 90% of the hotel occupancy rate around the Expo site is expected to open up after the project is opened.

Affected by factors such as the opening of the carnival and the extension of the operation time of the China Pavilion, the recent business of the budget hotels around the Expo site is very good. Jinjiang Star Company has 5 Jinjiang Star stores and a Baishi Express Hotel around the Expo Park; Hanting Group also has 8 stores around it. As of yesterday's statistics, the occupancy rate of these Jinjiang Inn and Hanting Hotels is as high as 90%.

According to industry insiders, after all the projects in the Carnival are open, the "Carnival + China Pavilion" route will set off a small climax for foreign tourists, especially family members.

The price increase of the two major parks in Hong Kong does not affect the summer tour of Hong Kong.

Hong Kong Disneyland and Ocean Park increased their prices in August and September, but the price of tourists buying tickets through the travel agency or participating in the tour group was not affected, and the summer travel offer did not rise.

Affected by inflation and other factors, Hong Kong's two major parks have recently implemented new fares. According to the relevant person in charge of Ctrip.com, passengers who participate in tour groups or purchase tickets through travel agency channels can still enjoy the previous fares, related group tours, free travel and two major park tickets and other travel products. Summer prices are not subject to new tickets for the park. The price impact will continue until November 30 this year. From the registration situation, the summer market has not been affected. In particular, the parent-child tourism related to the two major parks is still a hot spot for summer tourism. The hotels in Hong Kong Disneyland continue to be full, and it takes half a month to book a room or related tourism products. .

How did ancient lovers spend Valentine's Day? What kind of romance is "roof fan" in the classical garden of Lotus Field? This year's Tanabata (August 6th), the ancient garden will be the first to launch the Tanabata Garden Party, and Extend the closing time to 8:30 pm.

On the evening of Tanabata, a â€œHanfeng Yayunâ€ show will be staged in the area of â€‹â€‹the ancient garden. The well-known Shanghai community â€œHan Weiyangâ€, which is dressed in Hanfu, Hanqu, and Hanli, will lead tourists through time and space to experience the traditional Tanabata customs such as needle-punching, prayer and prayer. After the ceremony, the couples will also watch the "love of the firefly" carefully prepared by the garden, or join hands in the ancient garden to float a lotus lamp with love dreams and sly, more than a candlelight dinner Romantic night of heart.