On the 22nd, it was the fifth city free car day in China. This year, the relevant departments of this city have designated some roads around the Olympics as car-free day activities. The area is prohibited from driving from 7 am to 7 pm for a total of 12 hours. 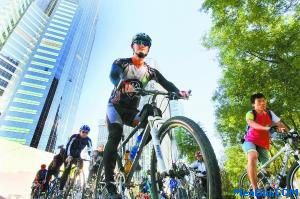 On the 22nd, in the core area of â€‹â€‹the CBD, hundreds of bicycle riders from the Beijing Youth Bike Riders Association and other groups, through the demonstration cycling activities to promote green travel to the public. The day was "World Car Free Day", and the Youth League Committee and the city's youth associations jointly launched the "World Car Free Day 3510 in Action" campaign, calling on people to actively adopt green transportation. Reporter Fang Fei

On the 22nd, it was the fifth city free car day in China. This year, the relevant departments of this city have designated some roads around the Olympics as car-free day activities. The area is prohibited from driving from 7 am to 7 pm for a total of 12 hours.

The reporter learned that it is possible to run a car without a car park at noon. Car-free days have shrunk, and the absence of car-free days has caused controversy.

On-site: The event ends half a day in advance

The scope of Beijing Car Free Day is mainly selected in Olin West Road, Beichen West Road, North Fourth Ring Road, Beichen East Road, Olin East Road, North Fifth Ring Road (excluding the above road main and auxiliary roads). A rectangular area is the car-free area, which is the range of the Olympic center area. Relevant departments issued notices the day before yesterday. From 7:00 to 19:00 on the 22nd, except for buses, taxis, special vehicles and other public transportation (school buses, commuter cars), other vehicles are prohibited from passing through the car-free area.

At 10 o'clock in the morning, at the intersection of the National Stadium North Road, a reminder card reminded the driver of the social vehicle to bypass. Mr. Peng, who lives in the Nanli Community opposite the Science Park, is waiting for the 81 bus on the roadside. "I knew it a few days ago. I also saw the notice in the community. I have been saying in the news." Mr. Peng said that he and his neighbors are very concerned about the car-free day. I know that there is a car-free day activity area next to my home, and the big guys consciously change to public transportation. In addition to his bus ride, the neighbor who lived upstairs also consciously changed to the subway line 8 to go to work.

However, at about 15 o'clock, the reporter found on the Beichen East Road that Daxu Road and Daxie West Road in the area, the social vehicles were passing unimpeded, and the car-free day activity had already ended prematurely.

The traffic coordinator at the East Gate of the Bird's Nest raised a car-free day and was not clear about the specific scope of the activity. "Is it the internal road of the central area?" He told reporters that before lunch, all the roads in the area were already Return to normal, social vehicles can drive normally, and traffic is not prohibited.

Itâ€™s indifferent to mention the car-free day in the vicinity of the Water Cube. â€œThere is no social vehicle in the central area. Itâ€™s a symbolic meaning to choose a car-free day here.â€

Miss Shi, who was working in the Bird's Nest, still drove normally to work yesterday, and was not affected by the car-free day. She understands why the election in this area may be due to the fact that there are not many social vehicles and will not have much impact on the surrounding road traffic.

The traffic control department stated that it is not mandatory for the traffic police to conduct on-site guidance. If there is a social vehicle entering the area, it cannot be punished. The green and low-carbon travel concept also requires the owner to practice consciously and cannot be forced by the government. (First Travel Network)