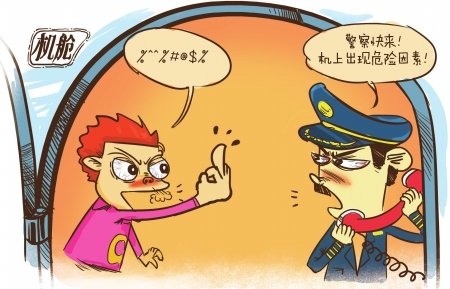 Comics: Jiang Xuanpuan Same plane passenger: Captain abuses his power to report false alarm Airlines: Captains have the power to stop unsafe factors â— On the flight from Chengdu to Beijing, this incident led to an overall delay of more than 3 hours. â— The police made him go to the destination after he criticized the man and ensured that his mood was stable. On airplanes, passengers' excesses may affect themselves and other passengers. At noon yesterday, on a flight from Chengdu to Beijing, a passenger did not take off because of dissatisfaction with the aircraft, and made an insulting behavior against the captain. The captain called the police on the ground of â€œrisk manâ€. The man was able to take off after the patient education of the police and the mood was stable, resulting in an overall delay of more than three hours. Excessive: passengers to the captain to the middle finger Mr. Kang, a passenger on the same plane, said that the CZ6162 flight from Chengdu to Beijing was scheduled to take off at 12:20 noon, but it had not flown yet. In the process, a male passenger appeared very excited and even gave the captain a middle finger. Subsequently, the captain alarmed the airport public security officer on the ground that there were dangerous people on the plane. After receiving the alarm, the police quickly arrived on this plane. However, some passengers around believed that it was the captain who used his position to report a false alarm and let the passengers accept the police investigation, which led to further delay of the flight. â€œSomeone was dissatisfied with the captainâ€™s actions, but the captain was not able to hide and meet with the passengers.â€ According to Kang, the passengers on the entire plane had waited for a long time, the aircraft did not take off, and the aircraft did not have air conditioning. Everyone is sweating hot. After the police conducted criticism and education on the man and ensured that his emotions had stabilized, he decided to let the man stay on the plane and continue to his destination. "The whole process may have continued for more than two hours, resulting in an overall delay of more than three hours." Response: Contradictions caused by air conditioning maintenance Yesterday, the reporter consulted the airline on the incident. The relevant person in charge of the airlineâ€™s sales office in Chengdu said that the aircraft closed its doors at noon yesterday and was ready to take off. However, during the taxiing, it was found that there was a problem with the air-conditioning system and it was decided to slide back and overhaul the aircraft. Due to no The law judges how long the overhaul takes. The captain decides to let passengers wait for the plane to rest. As the passengers on the plane went down one-third of the time, the maintenance personnel had already repaired the air-conditioning system and prepared to organize everyone to re-board. â€œAt this moment, a male passenger was very dissatisfied with the captain and the ground staff. He was paralyzed all the way. When he walked in front of the aircraft cabin door, he specifically shouted to the captain and put a middle finger on it.â€ â€œIn this case, Under the circumstances, the captain thought that the man was emotionally over-excited and was a potential insecurity factor that would have an impact on air safety and thus alerted the police to the ground." Focus: Captain abuses his power For passengers who questioned the question of â€œcaptains abusing their duties and reporting false alarmsâ€, the relevant person in charge of the Chengdu branch of the airline that interviewed said: â€œOn the plane, the captainâ€™s responsibility system was adopted, and the captain met with the aircraft and When the passengers pose a security threat, they have the right to stop. The passenger was very emotional at the time and he was jealous of the captain and ground staff. The captain was worried that if this excess emotion continues, it will constitute an unsafe factor after the plane takes off. , so only take the alarm measures." The reporter inquired about the Chinese Civil Aviation Flight Rules, in which one of the captainâ€™s rights stated that the captain has the right to take all necessary measures for any person who damages the normal order and discipline in the aircraft, violates the criminal law, threatens flight safety, or obstructs the mission. Measures. remind The words and deeds on the plane should be careful Not too long ago, there had been a similar situation in Chengdu due to passenger behavior leading to aircraft delays. On August 28, a man from Chengdu to Urumqi on flight CA4151 joked with empty crews during juggling and joked that he had a bomb in his suitcase. The flight attendant immediately alerted the police after hearing this, causing the flight to be re-cleared and delayed. The passenger was also punished accordingly. It is understood that according to the relevant provisions of the International Civil Aviation Organization, in order to ensure the safety of air transport, all intelligence information concerning the safety of navigation must be handled by the crew. Airport public security officials also reminded passengers not to falsely report about the security situation on the plane, so as not to cause unnecessary trouble for their own and others' trips.