At the age of 49, American Sayang retired early from the Fortune 500 companies and moved to Chinaâ€™s wife Tang Liang to settle in Mutianyu Village, Huairou District, Beijing. Sayang carried out a series of renovations to the villagers' vacant houses, making Mutianyu Village and Beigou Village next door a star-rated resort at the foot of the Great Wall.

Mutianyu Village is completely different from the traditional Chinese countryside. This feeling is obvious when there is still some distance from the village.

The road leading to the village is flat and wide, with the tall white poplar on one side and the verdant pine and cypress on the other side. There are often motorcycles with green onions and tractors that transport dry wood. In winter, the cold is full of life. When I entered the village, the blue-brick and gray houses became clear, and the roads on both sides were repaired into the look of the Great Wall. From time to time, there were still Maohua cars in front of us. Subsequently, a stone tablet engraved with "Mu Tianyu Village" led us to the village. Some of the villagers are busy with farming, and some are gathered in groups of three or five; our arrival has not disturbed their comfortable life. In fact, the villagers here have long been accustomed to the days of talking with outsiders or being photographed by them. They even joked that they lived in a "glass box."

Since the American Sayang settled here and made a series of renovations to the vacant houses in the village, the village has attracted countless visitors every year. What Sayang did not only created huge economic benefits for the entire Mutianyu area, but also changed the living conditions of local villagers. 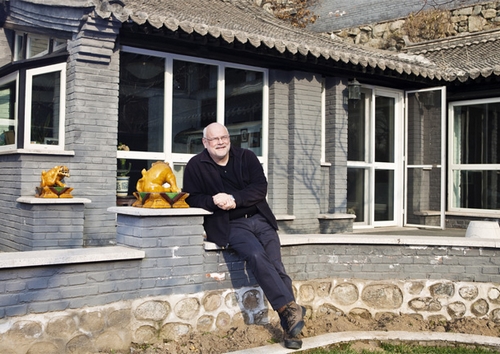 The first meeting with Sayang was in the Beijing Club, which is known as the "China's richest man club" - where he spends his weekly leisure and fitness. "Itâ€™s quite convenient to come from the village. Itâ€™s been more than an hour since I drove.â€ Sayangâ€™s Mandarin is surprisingly good, and itâ€™s also full of Beijingâ€™s â€œchildrenâ€™s voiceâ€. He said that the â€œvillage in the villageâ€ is Mutianyu Village in Huairou District, Beijing. In 2008, he was named â€œthe most beautiful village in Beijingâ€. Now Sayang lives there.

In the late 1970s, Sayang studied political economy at Berkeley University. For him, China is a mysterious and peculiar country. In order to understand China better, he intends to learn Chinese. It was during that time that he met Tang Liang, who was studying in the United States. Two people were registered to marry in the United States in 1982. After graduating from Berkeley University, Sayang studied Chinese at the National Defense Language Institute and Peking University. His wife Tang Liang has been serving his Chinese "family education." On January 17, 1986, Sayang officially came to China. He remembered that day very clearly, because he has never left since that day. Sayang told reporters: "At the beginning, Tang Liang did not agree with my decision because it was quite difficult for a Chinese to study in the United States. She did not want to return to China so soon. But then I convinced her, I think she I have not regretted it."

One day in 1996, Sayang accompanied his friends to the Great Wall in Mutianyu. A hawker walked over to them to sell T-shirts. The T-shirt printed "I boarded the Great Wall." Sayang joked to the hawker: "I have been here many times in the Great Wall. I don't want to buy this dress. Can you sell it in the house?" I didn't expect the hawker to "go back to the village to ask." A week later, Sayang received a call from the hawker: "There are empty houses in the village, they can't be sold, but they can be rented for a long time."

After getting the house, Sayangâ€™s first task was to transform this dilapidated farmhouse into a modern holiday home. Sayang told us: "The house is dirty and old, but I like its environment, and there is a small yard. You can see the Great Wall from home." Sayang reinforces the entire house and breaks the original room. The structure, the new large-scale windows, and the addition of some design furniture, and soon a decent holiday home was completed. â€œA few years ago, we only went to live on weekends or during holidays. Later, we gradually found ourselves inseparable from it, so I decided to move to the village to settle down.â€ At that time, Sayangâ€™s Chindex was a hospital management and medical treatment. The world's top 500 companies, such as equipment sales, "Chindex's treatment is very good, but I want to retire early and live my life." So, Sayang once again convinced Tang Liang, the two officially moved to Mu in 2005. Tianyu Village settled.

In addition to foreign tourists, the people in Mutianyu Village have not touched other foreigners. Therefore, the villagers all expressed novelty about the arrival of Sayang. Even people often watched at the door of his house to see if this new "foreign villager" is doing it. What? "I was not used to it at the beginning. I used to live in a big city. The distance between people is very strong. I don't even know who lives next door. After moving here, basically everyone in the village knows me. It is."

With the support of the village chief, Sayang began his "Pioneering" project. The whole project includes more than 20 renovation projects for vacant houses, and the scale has gradually expanded to the neighboring village of Beigou Village. The hotel has been rebuilt and put into operation including 1 hotel, 3 restaurants and 11 holiday villas.